Today we explored Lake Tahoe, descended the mountains, bought some good motorbike gear in Sacramento and arrived back in San Francisco.

We woke to another beautiful day, not a cloud in the sky but cold. Lake Tahoe is at an elevation of 6,225 feet (1,900 metres) so overnight temperatures were low. We were staying at South Lake Tahoe, that’s the name of the town.

The hotel had kindly allowed us to park our motorbikes directly outside the reception, safely in view of everyone and very convenient for transporting our bits and pieces between the bikes and our hotel room. This is another thing we learned on this trip, relying on saddlebags that do not detach from the motorbikes means squeezing odds and ends into awkward spaces and having to take several trips to and from the motorbike to cart stuff – I did get better at this as the trip progressed consolidating stuff in bags but it was still like doing a jigsaw every morning.

We left the hotel and headed east, circling the lake on the east side (anticlockwise), our logic being that the sun would be behind us casting light on the far mountains. This plan did work well except it was hard to pull over to take photos as the first section of the road was two lanes either side and busy so crossing the highway was challenging, and since we were riding on the right hand side of the road, this didn’t work too well. We also discovered that there is a lot of private land next to the lake meaning that access was restricted or expensive – a hefty $12 each to park next to a beach to get a quick look.

Eventually we found a viewpoint where we could snap photos to our hearts’ content. 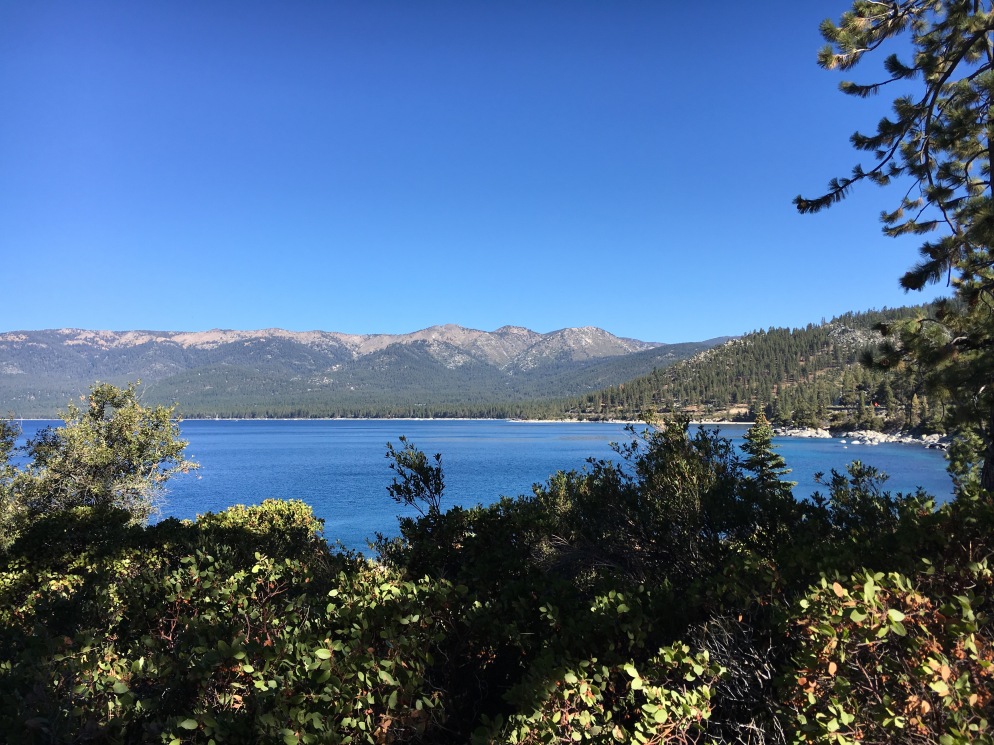 We stopped for fuel at Incline Village, the fuel light on Elvis hadn’t come on until the odometer showed 75 miles, the longest it has lasted all week.

We continued around the beautiful lake and reached the 1960 Winter Olympics village, Squaw Valley. The village entrance is a mighty arch displaying Olympic flags with clear pride of its historical past. We just drove past, saw the Olympic Rings at the valley entrance and left it to the GoPro to get the photos.

We left the Lake Tahoe, and rode Highway 89, and onto the 80. Even though this road was a highway, it descended through some magnificent country. The mountains and canyons providing eye candy for this ladyonmotorbike as well as fantastic fuel economy!

We lunched at a random, but great, diner in Auburn, run by a frienly Jordanian family serving great omlettes and chocolates malts prepared by hand.

After lunch, we continued to Sacramento, the forgotten capital of California. Here we browsed motorbike gear from Cycle Gear, a large store in northern Sacramento and bought a few things.

The final part of the day involved highways and changing outfits to cope with the change from chilly Tahoe to 30 degrees in Sacramento to a massive drop to 18 degrees as we approach San Francisco. The microclimates at play in California are phenomenal. Amazing to have two cities in such close proximity with such different weather. Can’t imagine why anyone would choose Sacramento over SF…

The trip across the Bay Bridge was magnificent and slow, we did hit rush hour so it was to be expected. Lane filtering helped enormously.

We then had to negotiate a bit of Downtown traffic and some of SF’s famous steep streets (I am Bullitt) and we were back at our SF hotel.

And so the circle is complete, back in San Francisco with one day left to find the very tall trees known at the Californian Redwoods.