Today we left Brisbane, after having spent time catching up with wonderful friends. We enjoyed the twisting roads of a local motorbikers’ favourite, had a brush with ‘da law’ and dodged the suicidal kangaroos as we made our way to Texas. Texas, Queensland, that is.
Saying goodbye to the last of the many wonderful people we caught up with in Brisbane (and who, kindly, put us up), we made our way our to Mount Nebo and onwards to Mount Glorious. This route is very popular with Brisbane -based bikers, I am told, its proximity to the city and tight, climbing corners are simply irrestable (Robert Palmer!) to many. Gary was revisiting an old haunt, having spent many years living in Brisbane.

The road did not let us down although recent storms had left a considerable amount of debris in the form of leaves, twigs and remnants of fallen trees, where chainsaws had been used to clear the road. It was safe enough and very enjoyable. One of my favourite stretches is the section of temperate rain forest where trees hang over the road sharing their moisture with the surface.

We stopped at Westridge Outlook for a break and to take in the vista west across Lake Wivenhoe, Brisbane’s primary water supply, to the Great Dividing Range. 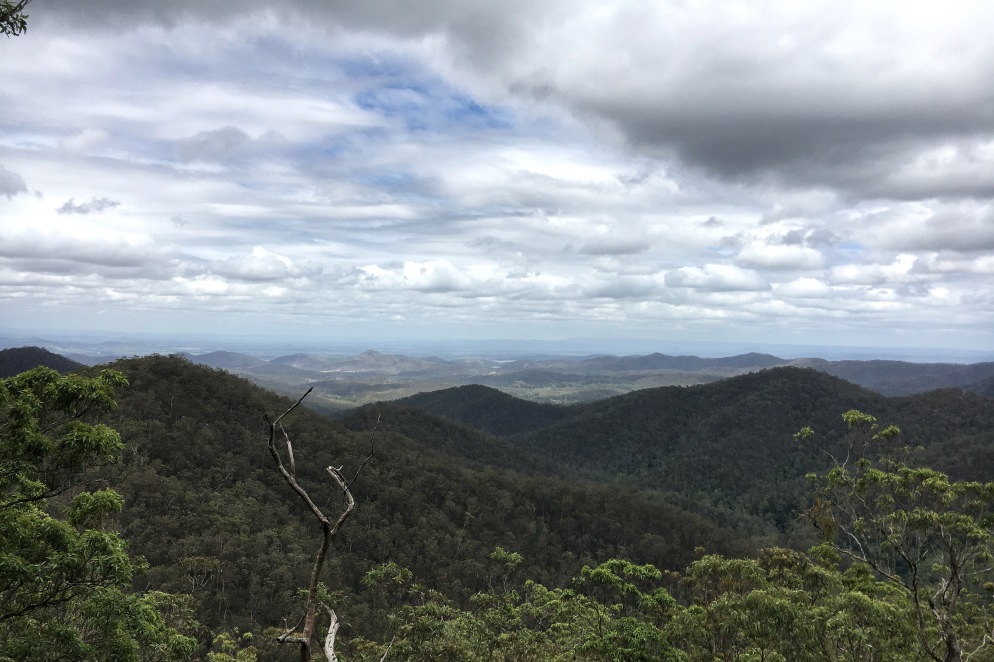 We descended the range via some very tight corners, which turned into long, sweeping bends as we rounded the lake to the South before crossing the dam wall.

We crossed the dam, I overtook a truck, speeding up slightly to help avoid stones flying off its trailers. And then I saw the lights. Of a police car. Bugger.

What’s the problem, officer? Madam, we just clocked you doing 110kph in a 100kph zone. Oh. One point on my licence (seriously, a single point, why bother?) and a $160 fine. I’m not saying that I shouldn’t have been speeding but I will make a comment that it was a very safe, wide, straight road on which to make a tiny mistake like that and shouldn’t they be doing some proper policing rather than bothering little old me? Did I mention the truck that was throwing off stones? A couple pulled up and made a complaint that said truck’s stones had chipped their windscreen, twice. They were told by the uninterested policemen to ‘call this number’. The policeman then performed a U-turn and drove off in the opposite direction from that in which the offending truck was heading. Seriously? 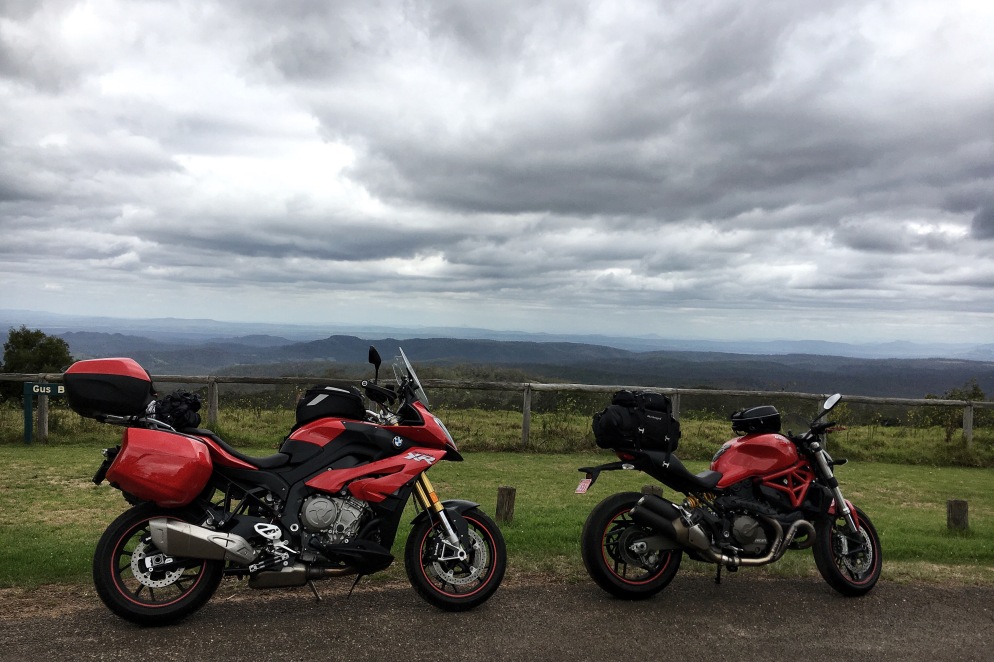 We topped our tanks up at Toowoomba and took the road to Goondiwindi, intent on reaching Texas as our overnight stop. Around 30 kms outside Toowoomba, and having passed through some beautiful farmland, we needed to check the map. And we found that our proposed route appeared to have a gravel section. I know I’ve dealt with gravel pretty well on my travels but the recent storms may have left these roads in a less than perfect state. Decision made, we turned around, heading back to Toowoomba.

We found a shortcut across to Warwick, a rather tedious straight road across the handsome plains, heavy cloud also meaning it felt like a drag. A quick stretch of our legs at Warwick and we were on our way, going west. I may have sang Go West over and over again into the intercom until Gary told me to be quiet, but this can’t be confirmed.

We were aware of the time and the sun setting at 7pm (this is Queensland and they don’t believe in daylight savings or summer time) and it was now 4.30pm. Traditionally, the further north you get in Australia, the more crazy the wildlife get around dusk. And then Gary saw a great big kangaroo just hanging out by the side of the road, trying to work out whether to jump in front of a passing vehicle or not. Fortunately, it didn’t, but it alerted us to the fact that others may not be quite so smart.

We had another stretch at a tiny petrol station and got talking to a guy driving a minibus, also to Texas. He heard that the kangaroos could be ‘pretty bad around Texas’, great. He offered to lead the way for us, him and his great big bull bars on the front of his minibus. We didn’t take him up on his offer straight away but after having spotted a considerable number of wallabies and kangaroos pondering their next move next to the road (most went away, a couple ran across the road a little way in front of us), and a very big goanna taking a stroll across the Tarmac, and us having slowed down to about 50kph, he caught us up and we took him up on his offer. 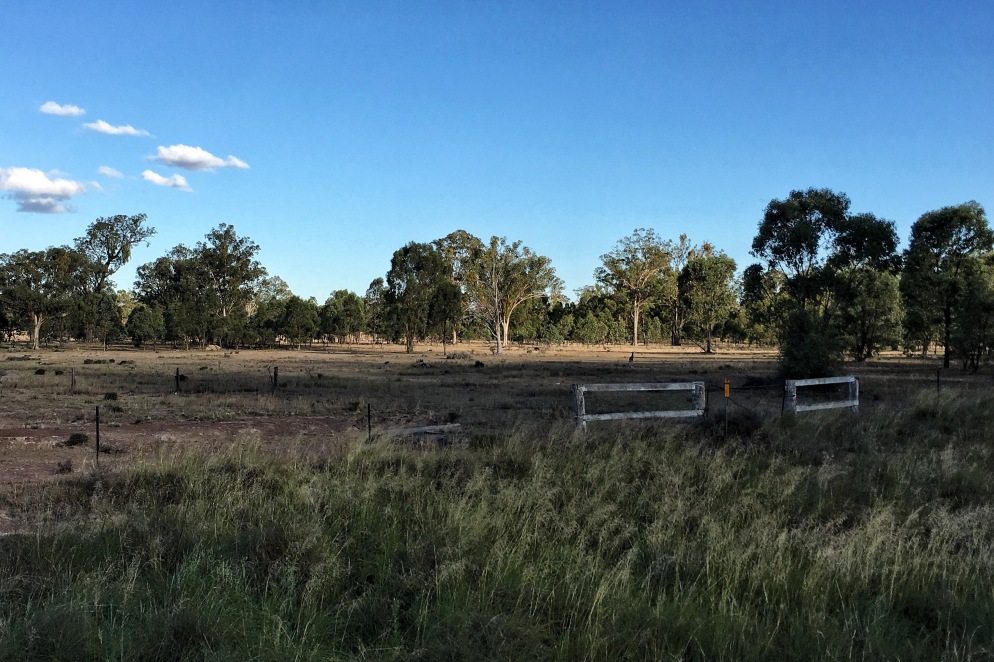 We arrived in the tiny town of Texas, unscathed, but with a new rule, no motorbiking in the country within 2 hours of sunset. Even if Gary is feeling optimistic.

By the way, the kilometre count is 3,190 since we left Sydney. Motorbiking legends!