Gary declared this as his ‘best day of riding ever’, wow, big call! I’m not quite so definitive (my Mum always describes the ‘holiday of a lifetime’ as a bit sad because then nothing will be ever be better) but I will say it was a brilliant day and we discovered some wonderful new roads.We left Bombala around 8.30, before the fog had a chance to lift. Wrapped up warmly (and with handlebar muffs installed) we headed south along the Monaro Highway. 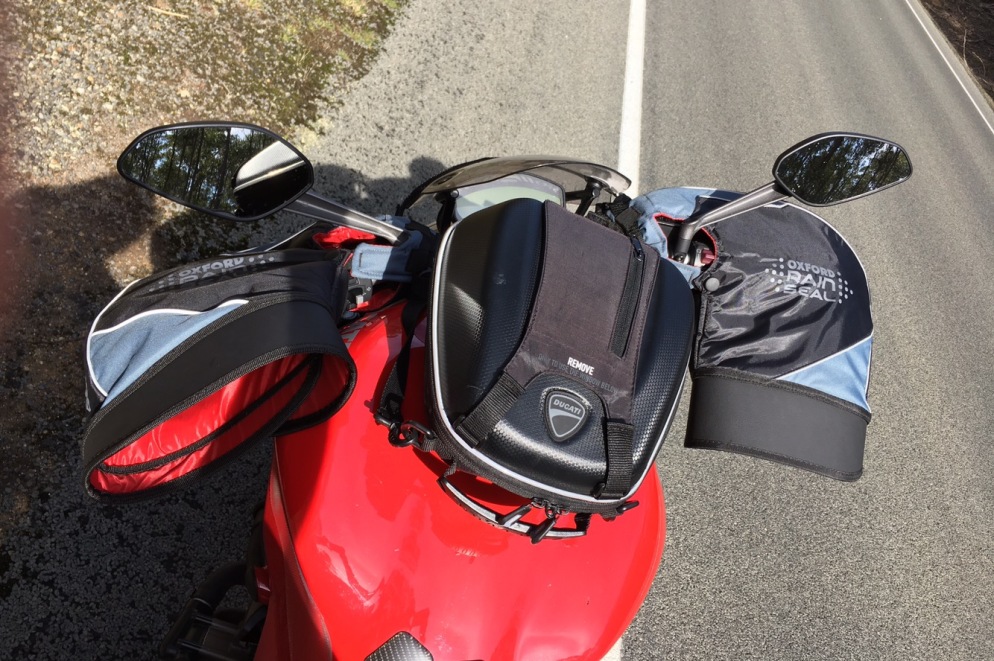 Thanks to Motorcylceparadise our day was set up. 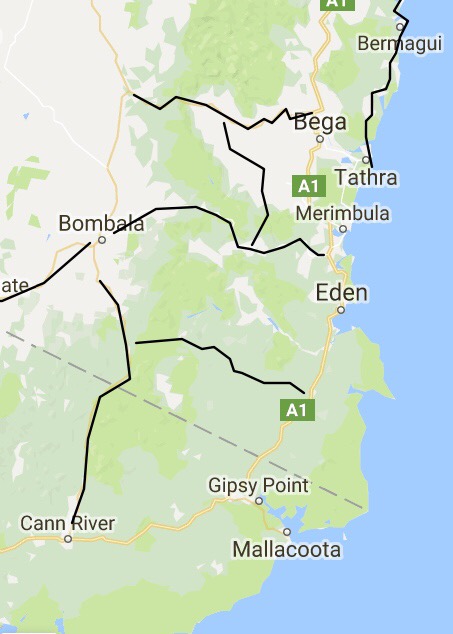 The first road of the day was the Imlay Road, a purpose-built logging road which winds its way around Mt Imlay and down to the Princes Highway half way between Gipsy Point and Eden.

I LOVED this road, it was my heaven, great surface, (Zed14 this road has been given a huge amount of TLC since you rode it) with the occasional pot hole and bump, otherwise as good as any country road we have risen in Australia. The road takes a pounding from the trucks and the weather but the roadgangs do a marvellous job of patching it neatly so the surface is still smooth, predictable and safe. The curves were were glorious, like a racetrack, I felt like I was riding on rails. Whoever is maintaining this road (the logging company, I suspect) is doing a great job. We passed a road repair crew, actually, waved our appreciation. 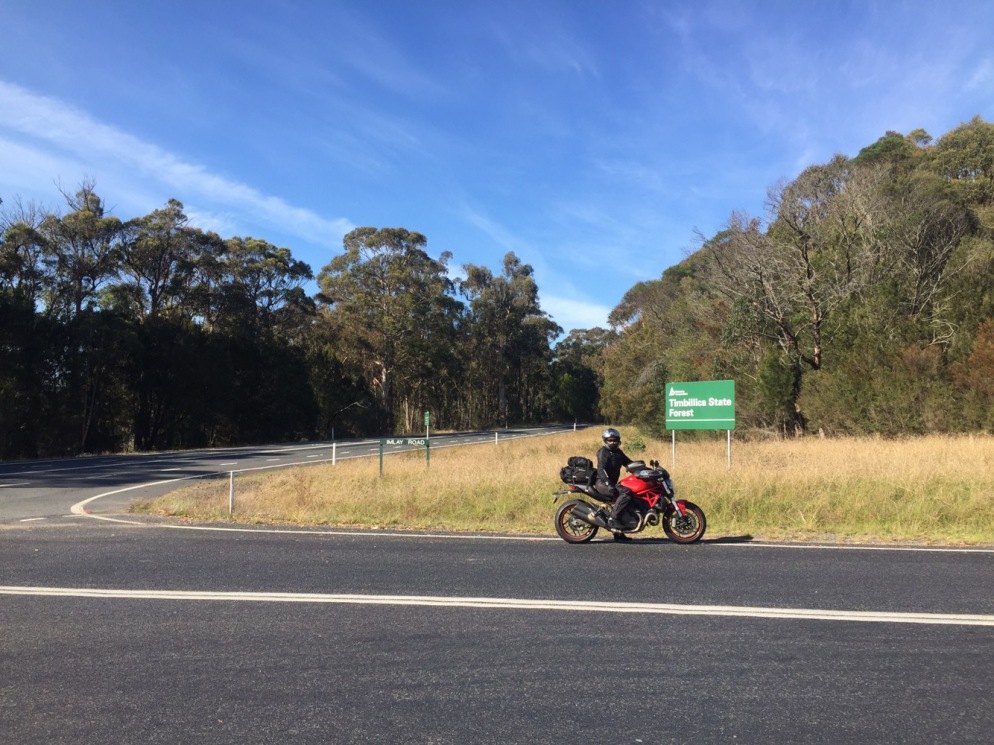 Anyway, once we got to the end, we turned around and went back up! 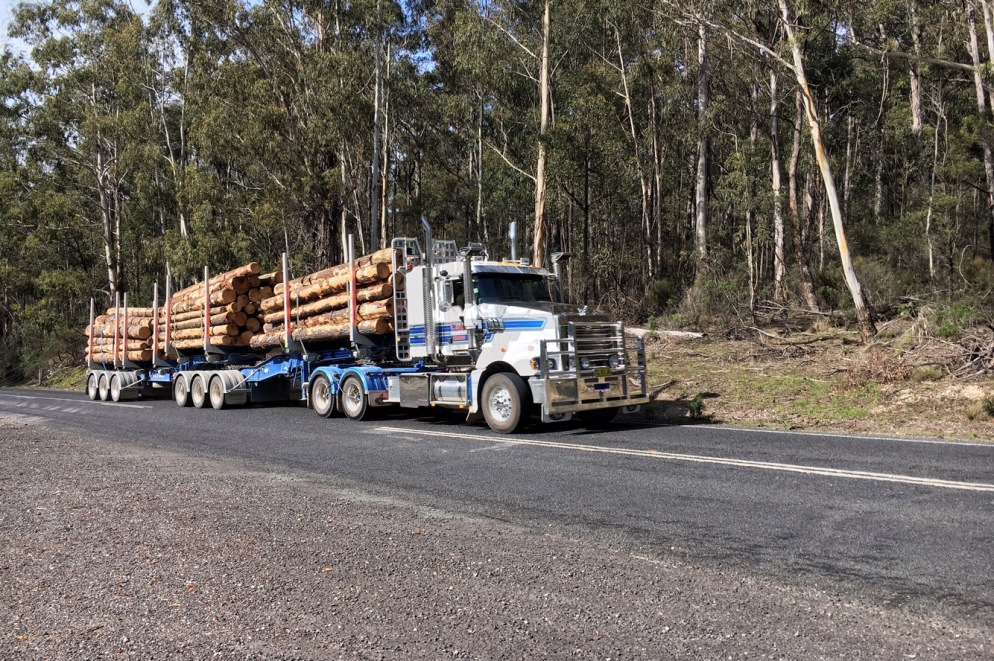 With only the logging trucks for company.

Once back to the junction of the Monaro Highway, we turned South again and rode it down to Cann River which was another treat. More smooth road and glorious curves, it seems to be a feature of the area. 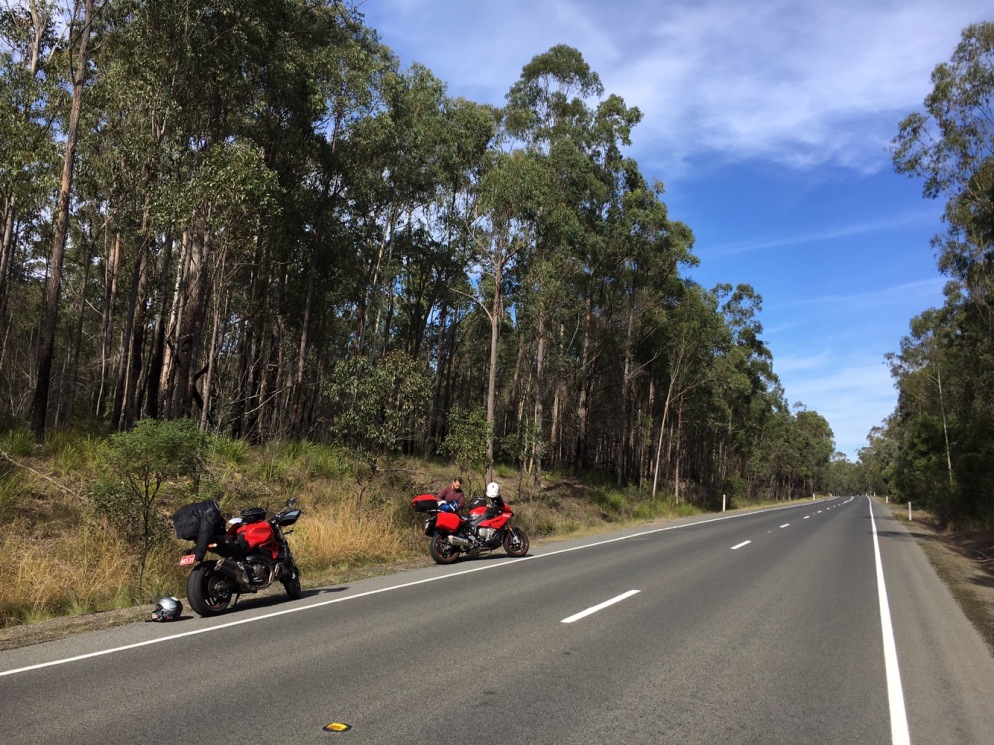 This is a straight bit but you can see the lovely surface. 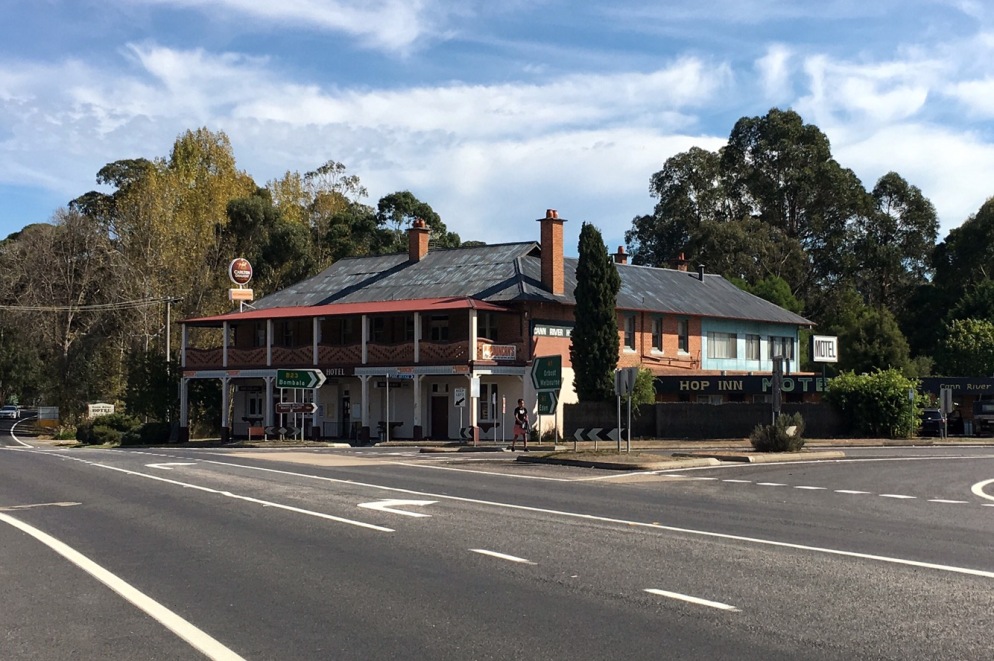 A coffee and refreshments at Cann River had us turning around and enjoying it again, back to Bombala and a mandatory fuel stop.

At Bombala, we took the Cathcart Road which turns into the Mount Darragh Road. 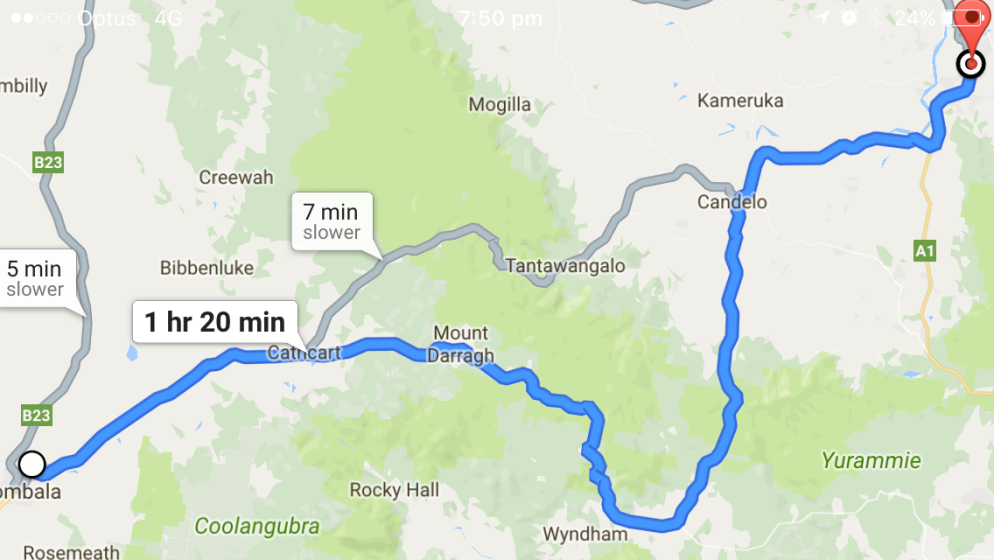 We felt we were being totally spoilt – this felt like the Pacific Highway,  north of Sydney, without the silly speed limits and no traffic! I say again, no traffic! We travelled through state forest and National Park, huge trees flanked the road, with sunlight poking through reminding me of the forests of Yosemite and expecting to see a bear run across the road. 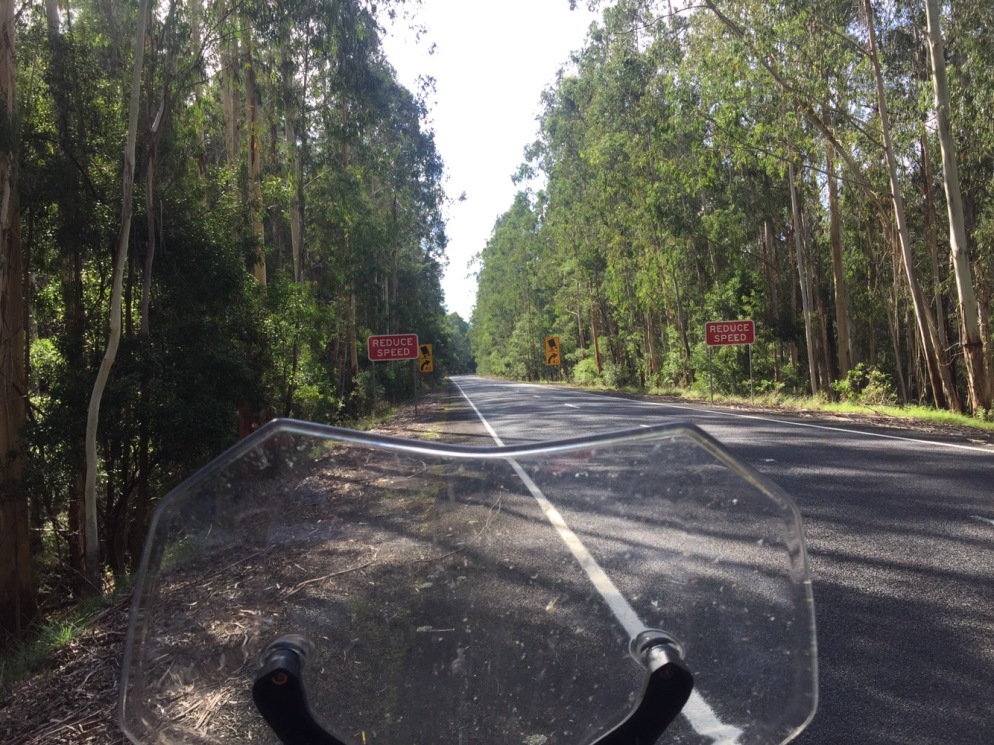 As we descended, the trees thinned out and we were greeted by rolling hills and green fields. 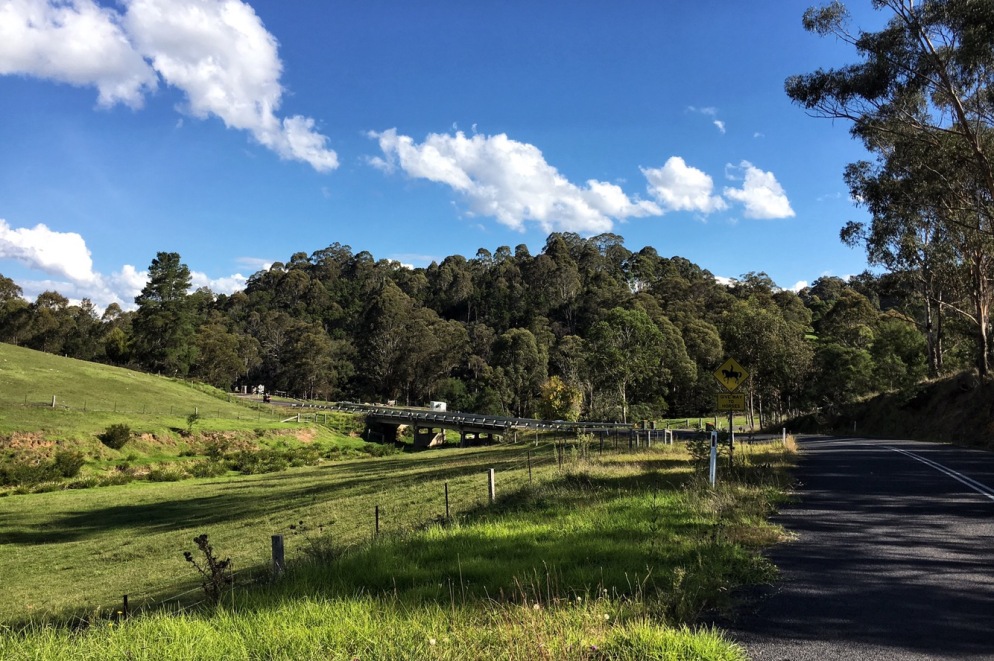 It also became hotter so a stop and a strip down was required. 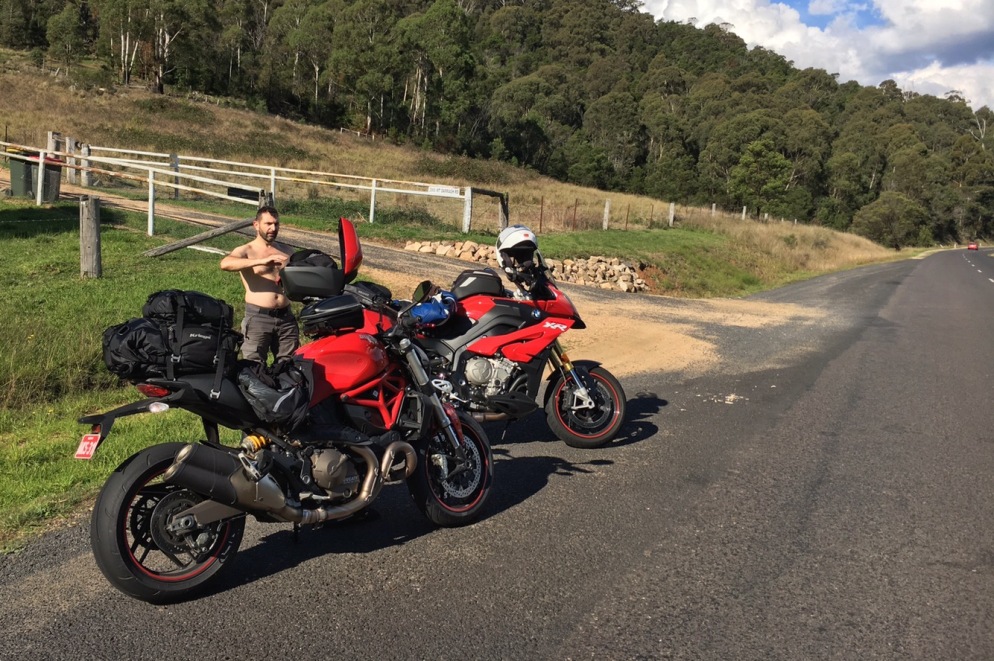 As we were doing this, a friendly local came out and asked if we were ok, we didn’t catch his name but Gary met Sophie, a very obedient farm dog. 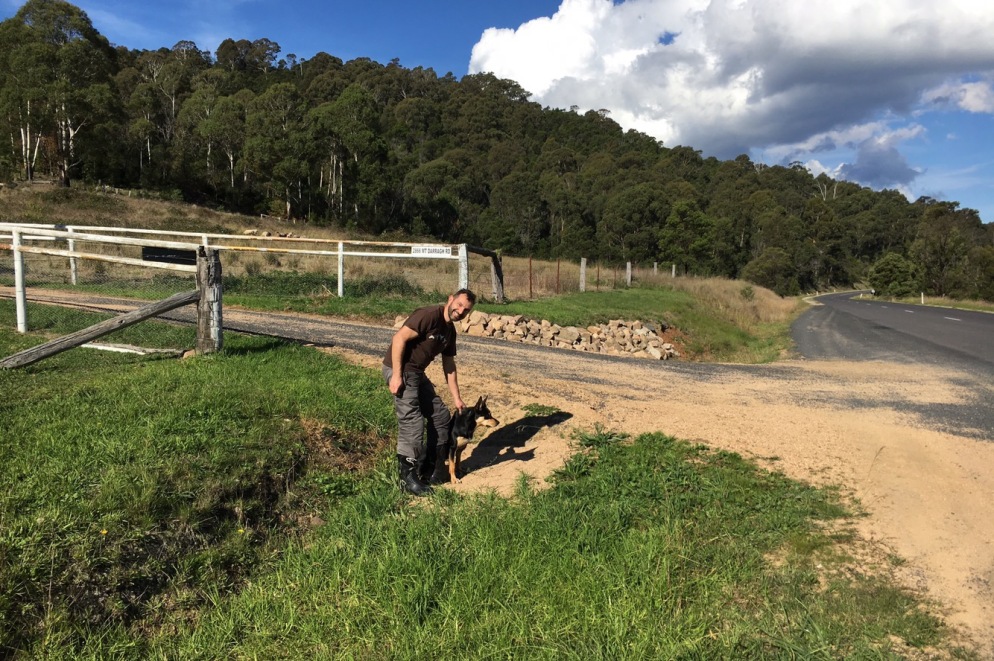 He also took this picture – he loves rustic fences! 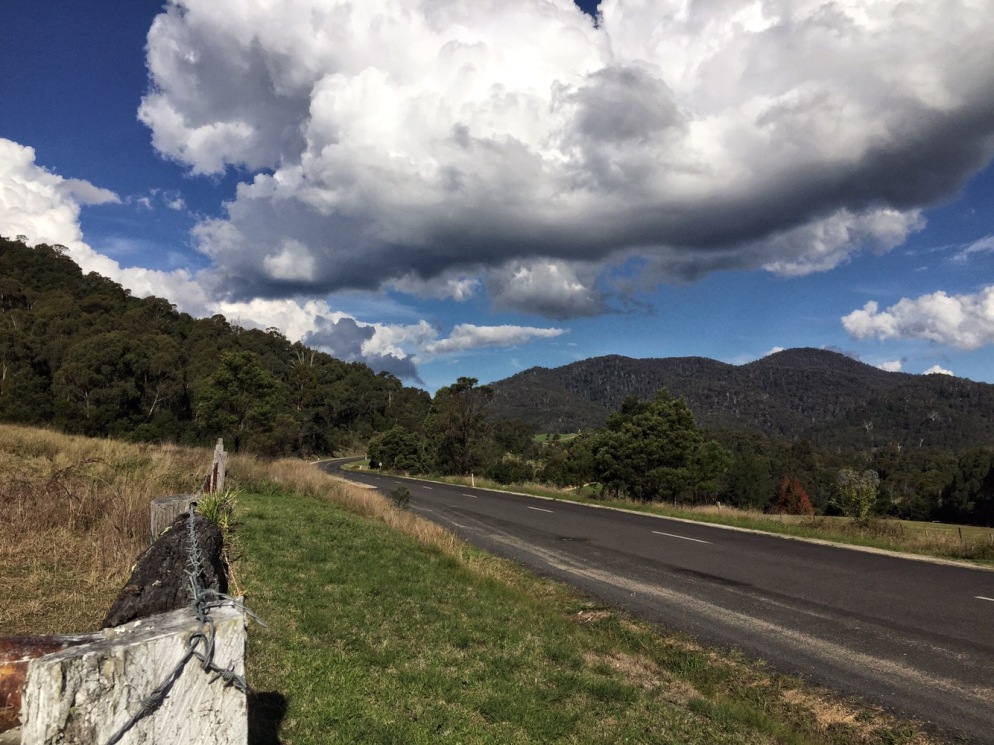 We reached the Princes Highway again and, this time, turned north. We were now on our homewood stretch, we need to be back in Sydney by tomorrow night so need to not leave too much riding for the final day. Also, the weather for Canberra tomorrow is not looking great and, of there’s one thing that this Ladyonmotorbike and her trusty companion hates, it’s riding in the rain!

We had thought we would get to Batemans Bay but we could see this on the horizon (heading east) and it was getting to suicide kangaroo time so decided on Narooma to overnight. 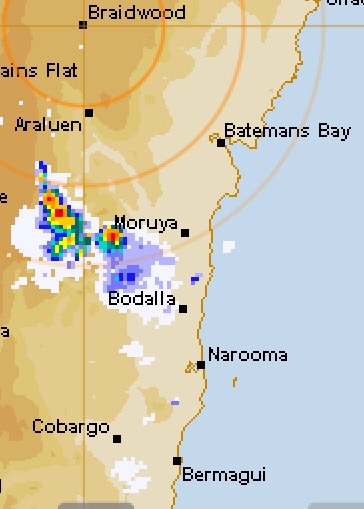 Narooma is a lovely seaside town, famous for its rock with a big hole in it that vaguely resembles Australia: 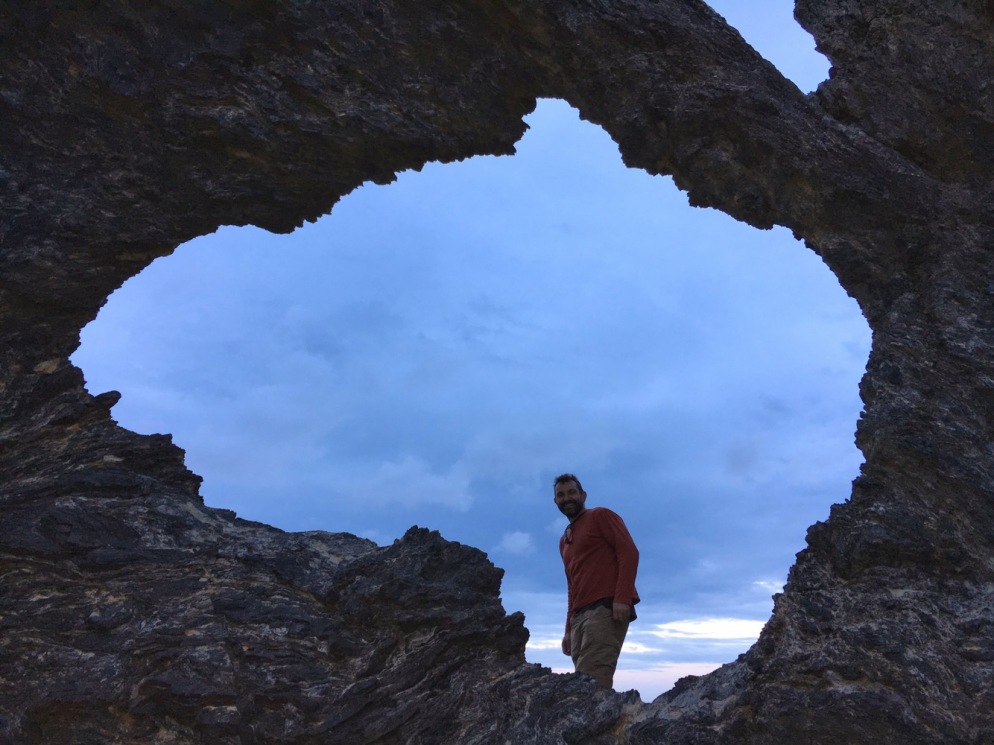 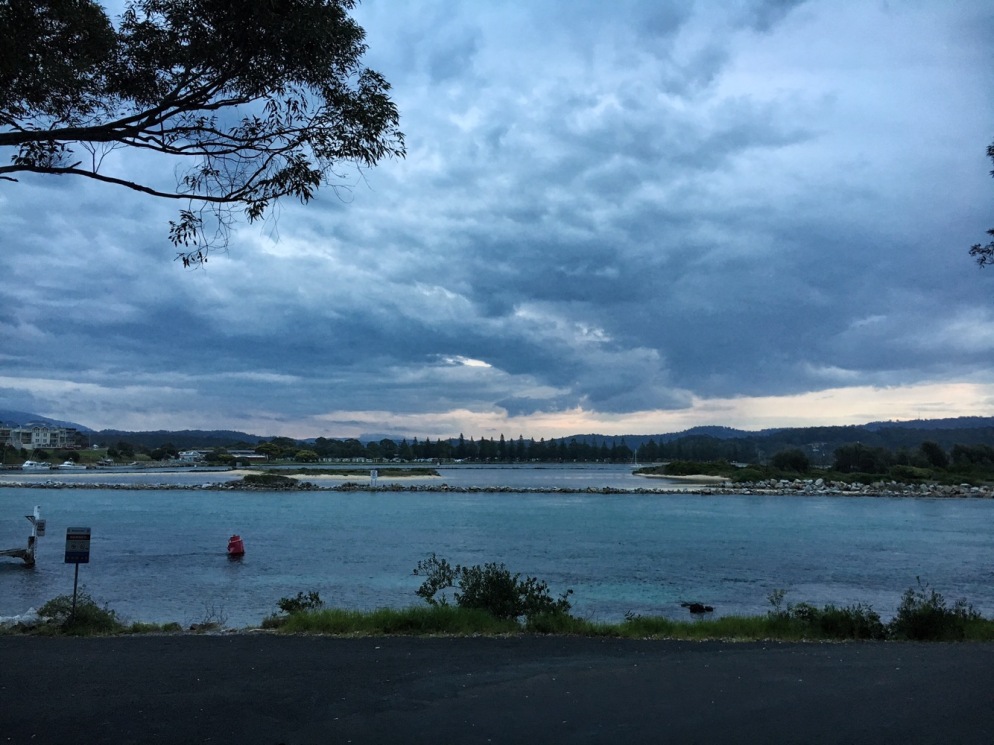 And its seals, and this time the wildlife behaved! 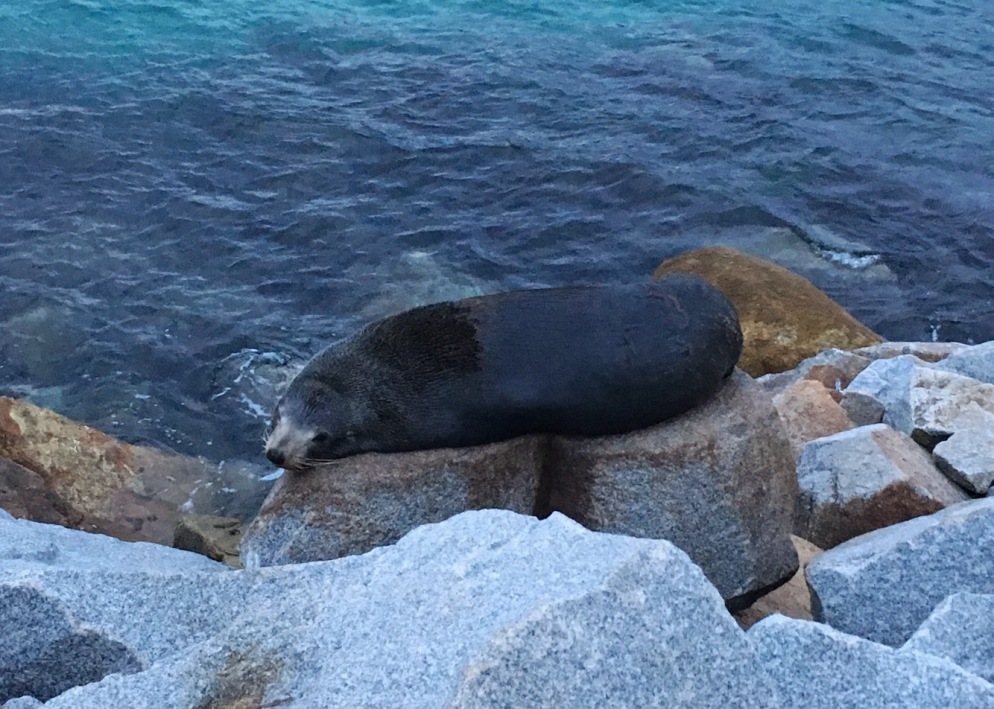 Tomorrow, we head north. And we’re hoping to avoid the rain.

So: was this the BEST day of motorcycling EVER since the motorcycling was ever invented, as at least one of today’s participants has claimed? Hard to say, but it’s also hard to think of one that was better. I still suspect this won’t be the last time I hear this…