Confusion over arrangements for the day turned out to be a blessing in disguise! And then there was the alpaca hugging.

This was our route:

I had wanted to join a group ride today but Gary had other plans. He’s arranged to meet someone to collect some tshirts, it was meant to be secret surprise but he had to tell me in the end.

We didn’t start the day well, my reliance on my internal alarm clock and having woken up early every day of the past week was misguided; we woke up late!

We dashed out the door to the meeting point, only to discover that someone (er, Gary), had the date wrong! Oops! Not to worry, we were out on our bikes so all was well with the world.

We headed towards Windsor and the Putty Road but en route had a change of mind  to head to Wisemans Ferry, a route we hadn’t ridden in a while.

From Olympic Park, we found James Ruse Drive and joined Windsor Road taking us past Rouse Hill. We then hung a right towards Pitt Town, a few rights and lefts and we joined (the aptly named) Wisemans Ferry Road.

On the way, at a brief stop, we met a guy on a BMW GS, heading our direction and then turning off at Wisemans Ferry and taking a fire trail to the Putty Road – awesome stuff, but not for Rita, she prefers Tarmac and so do I!

As we enjoyed the good surface and graceful bends, I realised that the area looked familiar- a good friend of my had bought a property in the area so we popped in, hoping she was home. And we were very much in luck, the lovely Tammarah and Jason welcomed us with opened arms and showed us around their work-in-progress property.

The highlight though, for Gary, was their flock of sheep and shepherd, Peris, the alpaca. Turns out that foxes don’t like Peris as she stands up to them and keeps her flock safe – who knew! And Peris? Apparently, in long grass, she looks like a periscope.

Frequent readers may recall Gary’s fondness for alpacas so he was delighted, as can be evidenced in this picture.

After our tour, we departed, a little heavier with a bag of home grown sweet potatoes and organic eggs. Thanks!

We then rode towards Wisemans Ferry and one of the two ferries crossing the Hawkesbury River, a free service, laid on in place of a bridge – a delaying by enjoyable part of the trip.

The road after the ferry is one I have written about before – it’s just great, it hugs the river, passing small homes either perched high above the flood line or perilously low that they must get flooded every few years.

The cliffs rose above us as we travelled down the Hawkesbury River valley and then alongside Mangrove Creek before rising up towards Mangrove Mountain. 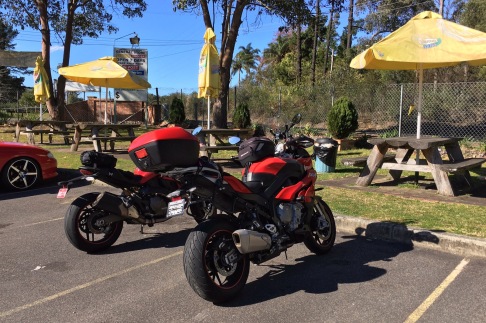 Lunch was courtesy of the Mangrove Friendly Grocer (and they were) before we took Peats Ridge Road towards Calga. At Calga we joined the Old Pacific Highway, which I wrote about last time – a huge favourite with local motorbikers and many were out in this glorious mid-winter day.

Usually, on leaving the Old Pacific Highway, our fun would be over and we would be subject to the Pacific Highway through suburban Sydney, one of the city’s busiest roads with 3 narrow lanes in each direction, frequent traffic lights, copious speed cameras and bad bad driving however, we have discovered the wonderful Comenarra Parkway. This road runs parallel to the Pacific Highway and, although it is speed limited to 60kph, there are considerably fewer traffic lights and the drivers appear to be more considerate – a much better to end a 250 kilometre ride, especially with all the unexpected alpaca hugging.