We’ve explored north, we’ve explored south, east isn’t really an option for a weekend seeing as we live so close to the ocean, so we decided on west. The wild west, the wild windy west. This is a story of wind, frost and puppies; oh yes, there were puppies!

Last weekend we went to the Hunter Valley, in the car! All very strange. We refer to our car as the shopping and squash (the game) machine as it rarely travels more than 5 kms from home and is used primarily for trips to the supermarket and to take Gary to squash and back. Anyway, the Hunter trip was good but the car was safely back in the garage. Now, one week later, a weekend away on the motorbikes was long overdue.

Inspired by the previous weekend’s visit to wine country, Gary suggested we should go west and visit Orange. For those unfamiliar with Orange, it is a city around 4 hours drive west of Sydney, with a number of excellent wineries which have really only just started to shout about their talents in recent years. The problem with Orange is that it is 4 hours west of Sydney meaning that only hard core Sydney-based wine lovers will make the weekend trip to visit the cellar doors, however, if one has a motorbike then a trip like this, being about the journey as much as the destination, becomes much more appealing.

We dressed for the cold as forecasts were showing around 12 degrees C in the mountains and it was a reasonably cool start in Sydney. The trouble with this, however, that it’s around an hour to the mountains and the Sydney spring sun warms the day up quickly, so by the time we reached the foothills we were steaming. Fortunately, an ascent onto the range quickly cooled us down and normal service was resumed.

We rode to Lithgow via the Bells Line of Road (yes, that’s the name of the road!), a road which is becoming increasingly better, due to improvements in surface and number of over taking lanes, but increasingly affected by the fun police who are keeping speed limits down to 80kph (50mph). Anyway, the views are still amazing across the Blue Mountains, presenting huge sandstone cliffs and deep mountain gorges.

From Lithgow we headed back towards Katoomba for about 4 km and took a road west towards Tarana (a backroad between Lithgow and Bathurst which is much more interesting for a rider than the very straight and boring highway). And then it got windy, really really windy, nothing like either of us had experienced before. We’ve ridden this road a few times before but not like this, huge gusts of wind would actually blow the bike off course, a serious consideration on some of the more narrow roads. It was necessary to lean the bike into the crosswind in some places. But there wasn’t much we could do but continue and, once I had gotten used to it, it wasn’t so bad. It made a picnic lunch by the side of the road a little fun but we got through it.

The winds had dropped a little by the time we arrived in Bathurst. From here, the plan was another backroad that we found on bestbikingroads.com via Rock Forest and Lewis Ponds. This turned out to be a gem with some rollercoaster undulations and fun bends. It also provided quite stunning views across the farm land, in some areas dotted with huge boulders, randomly placed as if for a giant’s amusement. 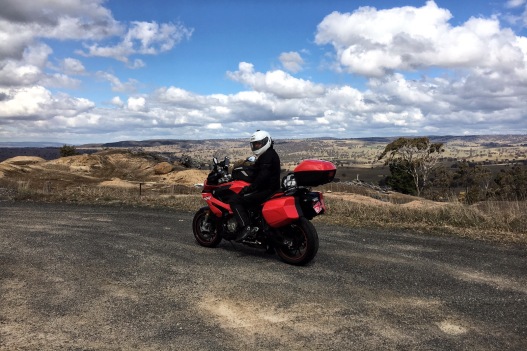 We arrived in Bathurst around 2.30, just enough time to check into our B&B and discover the cutest puppies in the world ever!!!

Little pug, fox terrier crosses and so friendly, I could have fitted the smallest one in my tank bag, although I suspect they might have noticed!

Anyway, back to motorbiking. After unpacking the bikes, we explored Orange a little, a beautiful old town with colonial architecture and heaps of great wineries. We visited one, having made a deal with lovely Gary that I would pillion and taste while he would ride. I don’t pillion much but when I do, it’s great, Gary’s bike (“Xavier” – what else can you call a bike with “XR” in big letters on the side) is very comfortable and this gave me a greater chance to enjoy the views off to the side of the road.

Our evening was a walk to a restaurant the other side of town; temperatures had dropped to around 5 degrees but after a day on the bike, a good stretch of the legs is very welcome.

That night, temperatures dropped below freezing however, the sun is strong at this time of year so it wasn’t long after sunrise that the frost disappeared and it had warmed up to a balmy 10 degrees.

Our return trip was back the way we had come, but from the opposite perspective. It’s funny how just going in the opposite direction can make it feel like an entirely new road. 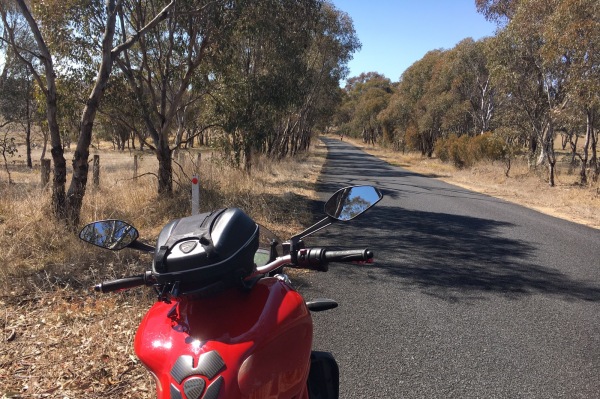 We also saw emus, I took a picture of one but you’d have to know it was there and even then, you might not believe me. In fairness, I think these emus were hanging out at an emu farm, there weren’t enough to be sure but they were rather chilled out in a very large fenced area so it was a distinct possibility that that was the case.

Another source of joy was the dropping of the wind; yesterday really had been quite the wind adventure but I was happy not to repeat that again just yet.

At Bathurst, we took a slightly different route back to Tarana, the true “Tarana Road”, a route that we discovered earlier this year while on a weekend group ride. Yesterday, we had trusted Google Maps which took us on Mutton Falls Road which is a bit longer and better maintained. Tarana Road is a bit of goat track in places but is a huge favourite for motorcyclists with good reason.

I love this road, it has everything, long straight sections, sweeping bends, 90 degree bends onto wooden bridges and only the occasional pothole. It follows the Lithgow to Bathurst railway line and the meandering Fish River so there are level crossings and humpback bridges to negotiate.

We stopped for photos, waved at other motorcyclists and enjoyed the distinct lack of high winds.

We also took some video of each other, this is me conquering a chicane. You’ll need to look closely.

Arriving back in Lithgow, we filled up with fuel and returned home via the Bells Line of Road, the M7 and M2, very happy indeed that we live in this wonderful country with wonderful roads to explore. I would write hashtag blessed but that’s not really my thing #blessed 😉 .