The wonderful thing about Sydney, Australia is that you can ride all year around. The only downside of this is that you might have to contend with some extreme weather.

In this case, I am talking about heat. The description ‘very hot and sunny’ and a forecast of 43 degrees Celsius by the weather forecaster is a subtle way of saying ‘sensible people should remain inside with the air conditioning on’. Turns out we’re not sensible people But we are creative and adaptable.

The ride was organised by Jon some weeks ago as a Sydney Easy Riders group ride. We signed up taking our chances with the weather. To be honest I thought the biggest risk was rain. Riding in rain is miserable, people do it but usually because they have to, not for fun.

As the weekend approached, the forecasts were coming in – Muswellbrook, a place pretty close to part of our route was showing as 43 degrees.

The plan was to meet northwest of Sydney, in Windsor, then head north along the Putty Road to the upper Hunter Valley; then across the range via the Bylong Valley Way; and then stay the night of Windeyer, a remote hamlet about 40 minutes from Mudgee. We enjoyed a cool ride to Windsor, recognising that this might be the coolest we might feel (bar aircon and showers) all weekend.

Our first stop after Windsor was at Grey Gums, an unassuming cafe half way along the Putty Road, popular with bikers and people keen to avoid the busy and boring Pacific Motorway.

This was the point where we donned our first level of cooling, Gary with his Inuteq cooling vest. And me with my Hyperkewl vest. (and no, we’re not on commission 🙂 ).

The Inuteq vest is dry to wear. It works by filling it up with water, the gel inside soaks up the water and keeps the material on the inside cool, very noticeable when worn against skin.

The Hyperkewl jacket works differently. You soak the entire thing in water, the gel inside soaks up the water and works by evaporation when exposed to moving air which, in turn, cools the skin. The reason that we have different options is purely because the Inuteq jacket wasn’t available in my size of small, typical! Gary swears by his, mine works pretty well too but does rely on ensuring sufficient air flow while on the bike, a bit tricky (at first) since I have installed a spoiler in an attempt to keep the bugs off but made easier by altering the spoiler angle so it directs air onto my chest area.

We also put on our Hyperkewl cooling scarves, which work similarly to my cooling vest but they are a bit easier to expose to air to obtain the effect.

Onwards along the Putty Road and we were very glad we had put on the cooling gear – travelling through the twisty ravine at the upper end proved to be very challenging. The only wind we experienced was that generated by our speed; like riding through a furnace. No measure was available it was surely getting up around 40 Celsius.

We turned onto the Golden Highway and it was hotter still, certainly in the forties. The Hunter Valley can be fierce in Summer.

We arrived at Denman for lunch where one of our group commented that it was the first time it had been cooler to ride with his visor down than up! Another said the same  about opening their jacket in an attempt to cool down. Needless to say, many cooling drinks were consumed at lunch and at every stop we made. I had packed our water bladder in a cool bag along with ice blocks and ice in the water which worked really well. The Peanut M&Ms didn’t come off quite so well; note to self, put them in the cool bag too.

The afternoon yielded the same extreme temperatures however some creativity with hoses at a couple of stops helped (great idea, Jason!). And yes, I’m talking spraying ourselves, fully clothed, with water – works a treat when getting back on the bike!

Thankfully the clouds came out later in the afternoon and provided a little relief, somehow riding in 35 degrees actually felt cool.

We overnighted at Windeyer, which is a hamlet with little more than a pub, a caravan park and a few houses but lovely people, a pool table and some great pub grub.

Unsurprisingly almost everyone headed for bed by 9.30. As Gordy put it, the day had been “…like riding with a hairdryer in your face for 8 hours”.

The next day, we woke to a forecast of much more comfortable temperatures, with a top of 29 degrees.

Our first stop was Hill End. Regular readers will recognise this place and the pub below from my multiple posts here, here and here, so I won’t wax lyrical again about how magnificent this area is (and that everyone should go, even by car!). Instead I have included a few pics (but don’t go anywhere, I’m not finished yet!):

And then this happened! So we’re clear, it wasn’t our fault but it could very nearly have ended in tears if it wasn’t for a good view and smart riding.

After Hill End, we rode to Bathurst and the took another popular route to Tarana. Again, I have written about this route because it’s fab but one of the things that is highly recommended on this road (and many, actually) is to always consider what might be around the next corner. Turns out, in this case, that was a tree. The great thing about these back roads is that there’s not many people on them, the bad thing about these back roads can be that there’s not many people on them to deal with this kind of thing. 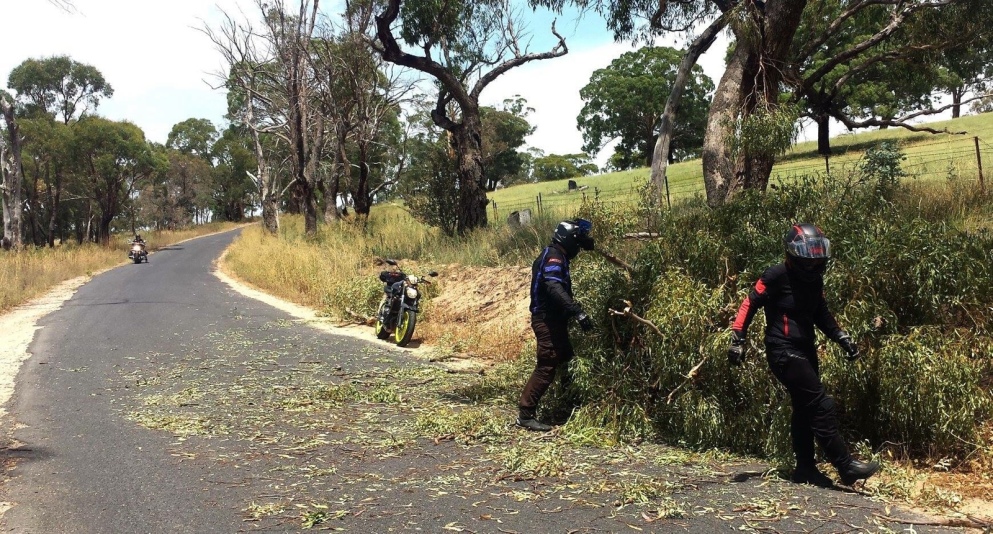 One of the leading groups in our ride came across this and, instead of keeping on riding, stationed bikes either side of the hazard and did their best to clear it. In the distance is Jason, on his Boulevard, and then there’s Lachlan doing his utmost to clear branches, and me, kicking leaves off the road.. every bit helps, right?

Lunch was at Tarana pub, got to love these places… reliable sources of food and a great place to have a rest.

The final part of the ride was Bells Line of Road (again, have written out this road heaps). We all said goodbye at one of the many apple pie shops in Bilpin (famous for its apples), reflecting on how we’d survived probably the hottest ride any of us had done. Despite the challenge, everyone had a great time and we were so much more experienced because of it – Death Valley anyone?

Thanks to my riding friends from Sydney Easy Riders for many of the pics for this blog and for another great weekend, you all rock!