Having sadly left the wonderful state of Tasmania, our trip was not over yet. A Melbourne bikers favourite of the Black Spur, torrential rain and a beautiful twisting road through yet another national park awaited us today.

And so it turned out, the crossing back was quite rough. Most of the night we were tossed around in our bunks like corks, awakening with bruises on all sides of our bodies.

I joke but I swear there was a moment from The Perfect Storm (a film) where the whole ship flew off the top of a giant wave before crashing into the trough. Still, no seasickness in our crew (ie Gary or me) so that was a relief!

We finally got some smoother water and maybe a couple of hours’ good sleep before the ship cruised into into Port Philip Bay and we were awoken from our slumber around 5am. We disembarked around 6am: this was going to be a long day!

Our plan (did I say ‘our’? I meant Gary’s, he is, after all, master navigator, my job is food and ride my motorbike) was to head to the legendary Black Spur and then onwards to stay in Harrietville for an overnight stay.

It started well, the heavy clouds around us looked like they might miss us. We arrived in Healesville, in the Yarra Valley, around 7.45. I had a hankering for second breakfast (first being muesli in a Keepcup with reconstituted dried milk at 5am, not bad, actually) so we found a lovely cafe (Wombat Chai), where said breakfast was ordered.

And then the heavens opened, and did they open, a thick belt of rain showing on the radar was about to damage our (self given) reputation as rain dodgers. So rather than risk a reputation destruction, we camped down for the next hour and half and drank coffees and juice. And the nice man filled our flask with boiling water, nice man.

Getting drenched by a rain storm avoided, our journey to the Black Spur continued. This road is celebrated as one of Australia’s best. It is Melbourne’a equivalent of Sydney’s Old Pac or Brisbane’s Mt Glorious, a twisty road close to the city where motorbikers gravitate. It snakes through a forest of incredibly tall eucalyptus trees. It having recently been drenched (but not us, ha!), meant a bit of debris in the road but I could see how this would be a lovely road to ride in the dry. 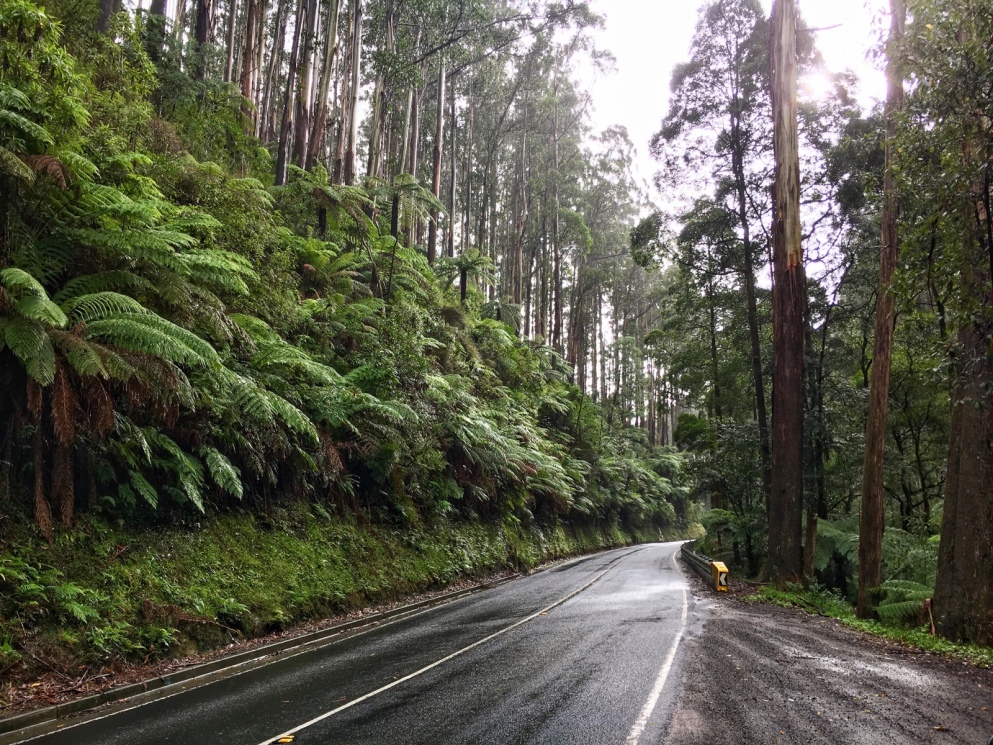 And looking the other way

Look at those trees!

After the Black Spur, my navigator became my saviour by helping sort out my steamed up visor. I have this thing called a PinLock on it, which is clear and supposed to lie flush against the inside of the visor, a bit like double glazing – this helps prevent the inside of the visor from steaming up. This doesn’t work if it somehow water gets behind it but to solve this requires the visor to be removed, the Pin Lock to be removed and everything wiped. Anyway, this is a fiddly job especially by the side of the road but we managed it. Phew.

Onwards to Eildon where we checked out the dam wall and a small part of the huge reservoir. 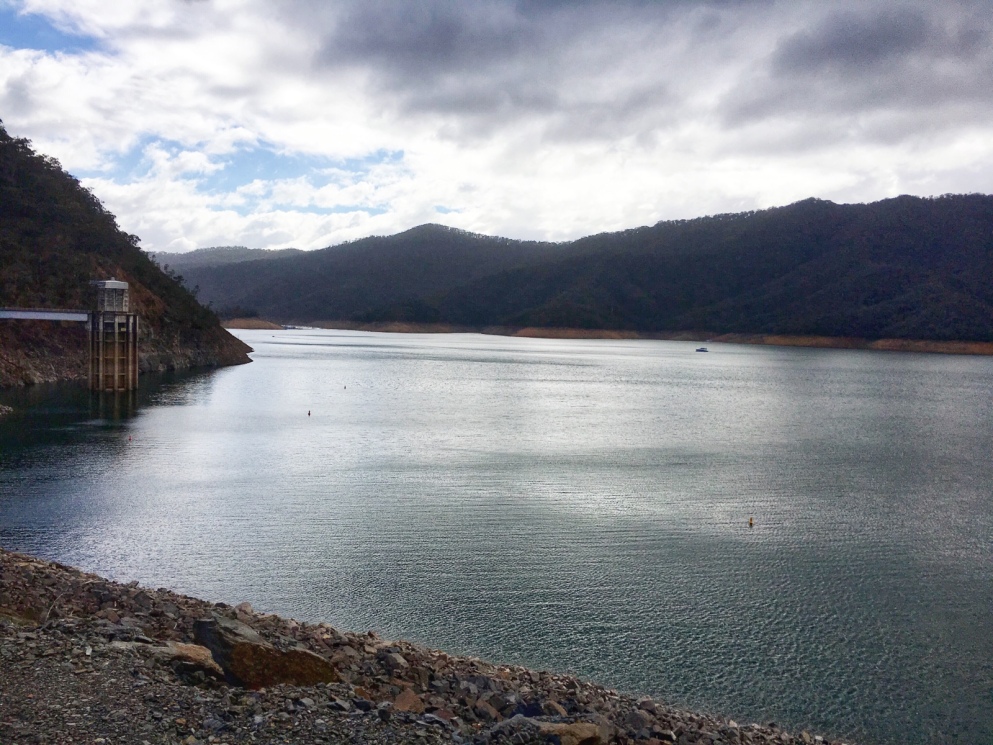 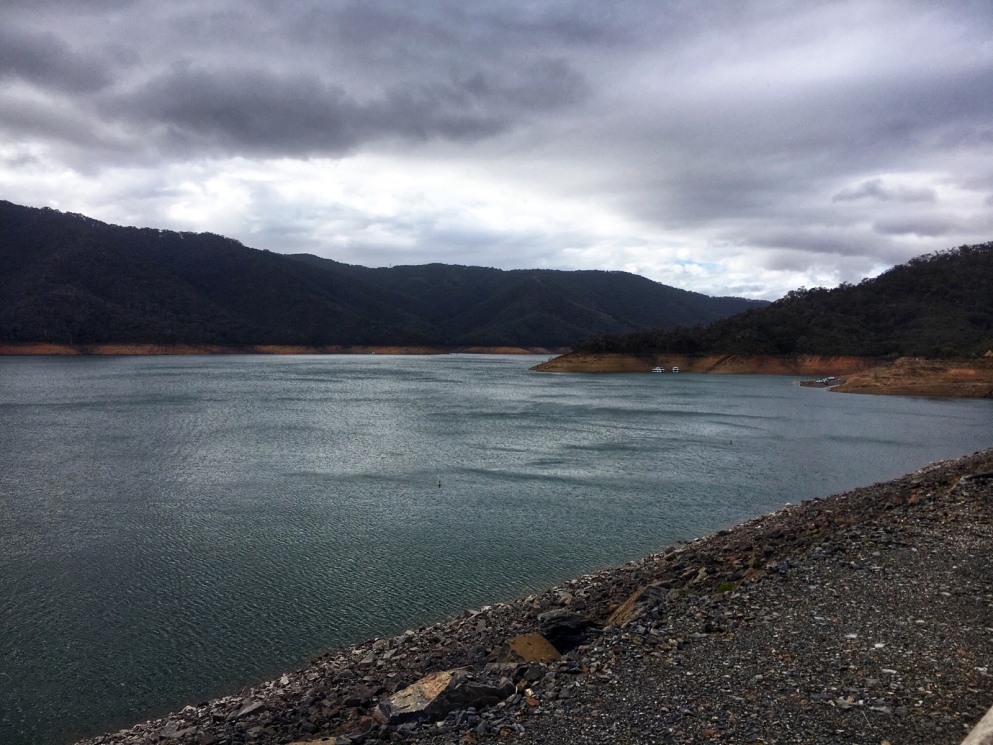 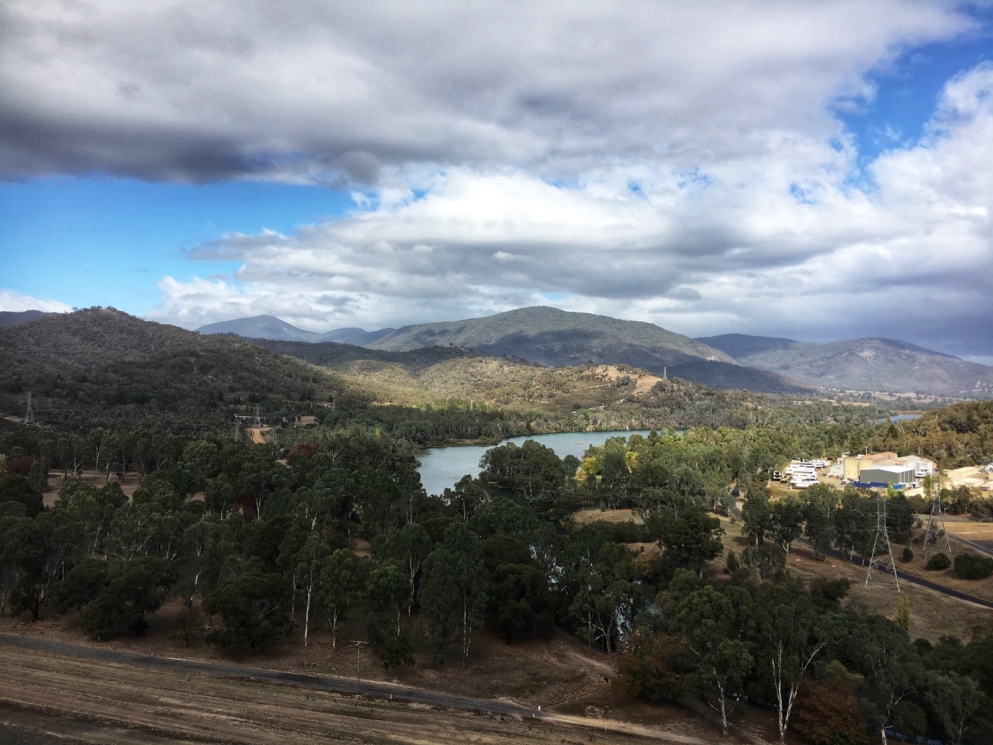 The next leg was the Eildon to Jamieson Road, you’d think we’d learn to believe Google Maps by now, claiming 66 km would take an hour and half but we were convinced that this was an exaggeration. Two hours later we arrived in Jamieson, admittedly we’d stopped a couple of times for a stretch and a cup of tea but, non-stop, I reckon that Google Maps was bang on. The road wound up and down through a thick forest, narrow winding roads, typical of the Australian Alps. 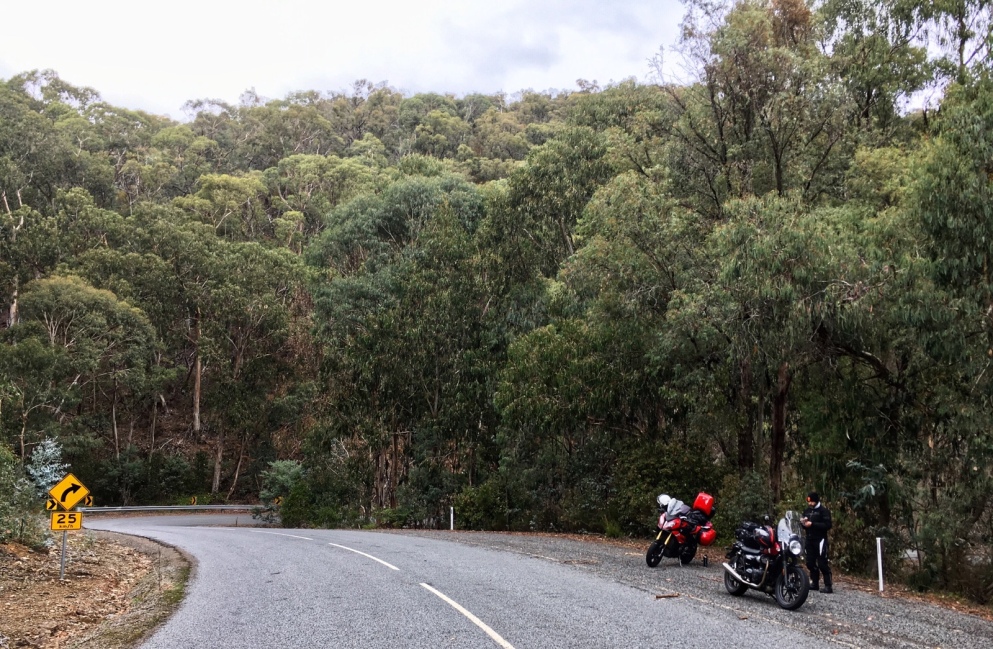 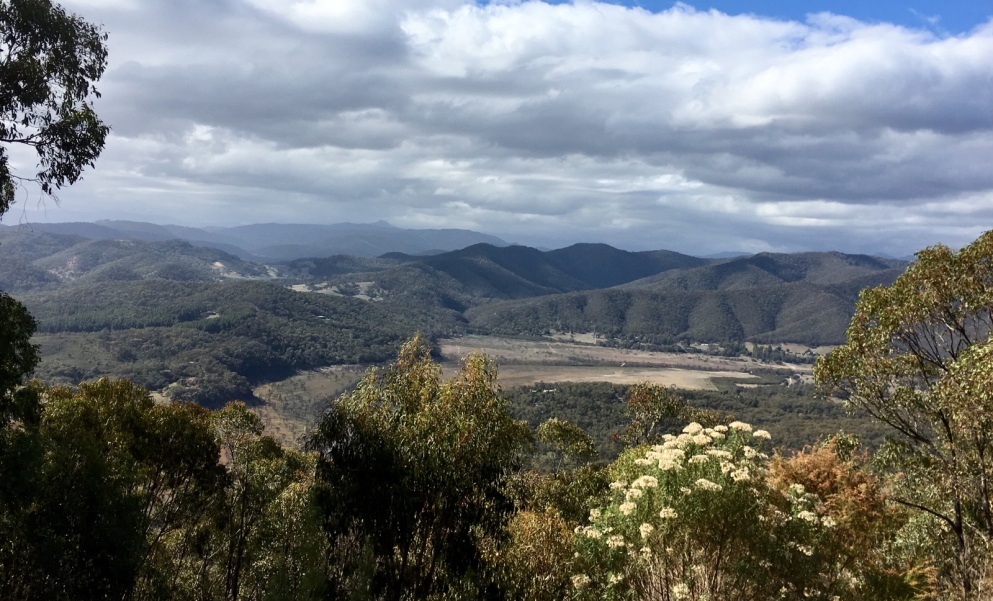 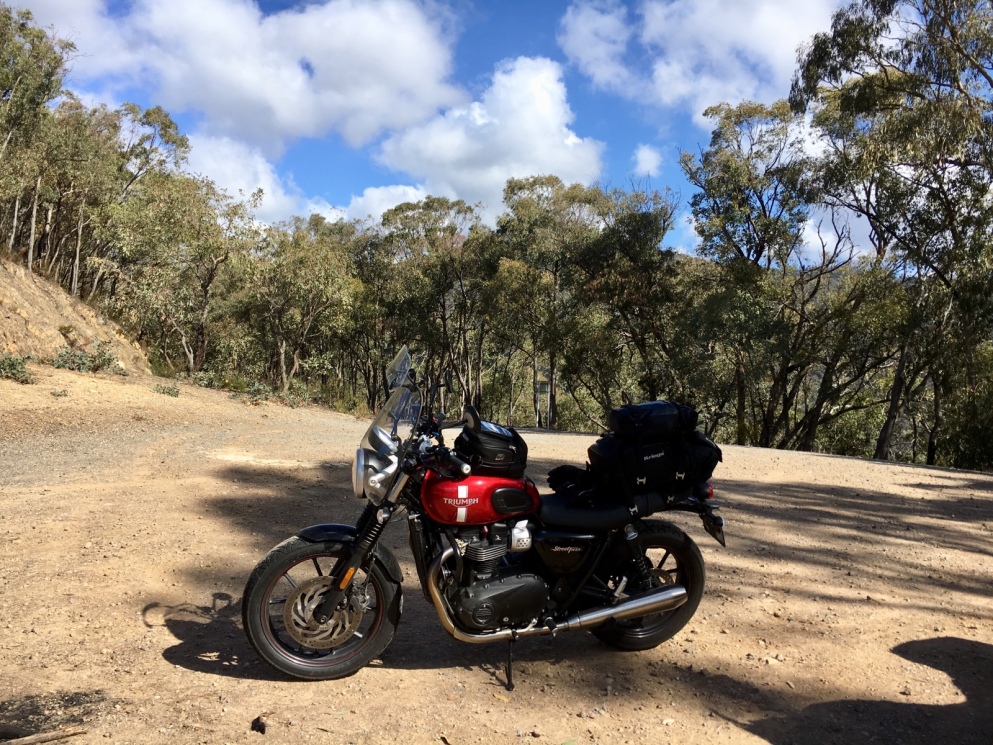 Arriving in Jamieson at 1.30, we grabbed a quick bite at the bakery and assessed our next move. We’d booked a motel in Harrietville, an almost 3 hour ride away and deliberately near to some great roads for the following day, but we needed to get a move on – to motorway for a bit or not motorway, that was the question. We lumped for the quickest way (motorway – about 30km of the Hume Highway) and got ourselves quickly on our way.

From the motorway south and back down towards Bright. Bright is a very pretty and popular holiday destination, made obvious by the numerous hotels, motels and holiday homes all declaring ‘no vacancy’ for that evening as we passed through.

Harrietville was only another 30 km or so, but we were glad to arrive at 5.30 as the sun was dropping along with the temperature. Winter is coming.

Tomorrow, we discover a road over a ski resort and another 100km stunner.