Looking to capitalise on a long weekend for the Queen’s Birthday in early June, we headed north to the amazing Oxley Highway. It was a successful trip, despite the inconvenience of forgetting most of our luggage!

Given the crazy weather we’ve been having in Australia, we though we’d leave long weekend plans to the last minute. That’s the Queen’s Birthday weekend in early June. We were contemplating a trip to the Oxley Highway. And then it snowed. Yep, a rare dump of the white stuff all over the Blue Mountains and exactly where we were planning to go for the long weekend. Oh.

Optimistic rain dodgers that we are we decided to stay firm, the forecast was good for the long weekend so we decided it would be fine. Hopefully.

A last minute shout out yielded friends for the first day and night of our trip so we met 6 companions at Windsor on a very foggy Saturday morning.

Our route took us up the Putty Road, through more fog to our first stop at Grey Gums International Cafe. Feeling a bit of a chill I reached into Gary’s pannier for an extra top.

Sorry, what? I checked the other one. Empty.

Yes, good readers, somehow we managed not to load the pannier liners, complete with all our clothes and toiletries, into the panniers themselves. How on earth? It’s a long and boring story but let’s just say that they’re sitting next to our car in the secure garage of apartment building. Not helpful.

We tossed up retracing our steps but that would cost us 4 hours of riding and life’s too short for that!

Our solution came in the form of Woolworths (for underwear, essential toiletries) and Big W (a thermal top each), problem solved!

Back to riding! Putty Road, beautiful, through the Hunter Valley, stunning and up to an old favourite of ours, Dungog and its heavily potholed and repaired streets.

Poor Dungog, it suffers from more than its fair share of torrential rain and occasional flooding. The incident in 2017 was quite devastating. Still, it’s a pretty town with lovely wide streets and friendly people.

Onwards towards Gloucester, we took a side trip towards The Gloucester Tops, a branch of the Barrington Tops mountain range, stopping when the road turned to dirt which didn’t deter some of our bolder friends so we took the opportunity for a rest.

Overnight in Gloucester, we waved goodbye to our friends and headed north. The plan was a bold there-and-back to the Oxley Highway, one of New South Wales’ premier motorbiking roads which I have written about previously here.

The day dawned and the potential frost didn’t materialise but the fog did. 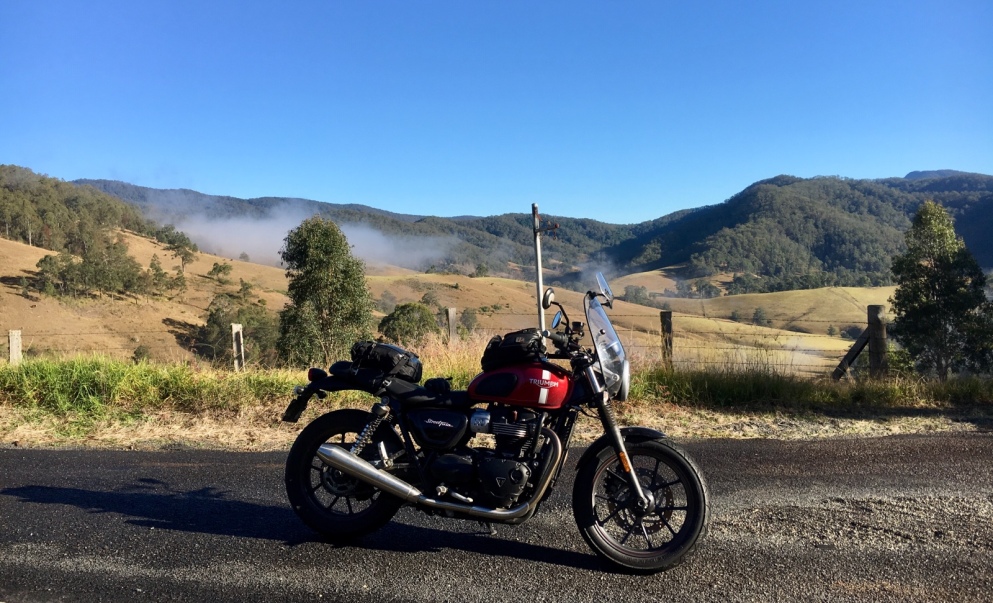 This picture is just a small hint of what it was like but fortunately it didn’t last long.

We stopped for a stretch and a view across the beautiful valley.

Arriving in Walcha, we stopped for coffee at a parking spot set up just for Ruby.

The Oxley was as fabulous as ever, the road mostly dry despite it being midwinter; we really had lucked out.

We snacked for lunch and met a group of learners plus a couple of more experienced riders up from Sydney for the weekend.

Now, I don’t generally get on my high horse in this blog but this struck me as a very stupid idea. The learners were kids having mostly just obtained their learner permits and it struck us as a very stupid idea to take them on such a long ride on such complex roads. Motorbiking is a very skilled activity, coordinating all your limbs to control the bike plus processing a large amount of visual information very quickly and it takes a while to develop this skill. Plus it takes time to build up your mental and physical fitness so as NOT TO DIE! That might sound like quick judgment of an enthusiastic group of riders but this actually played out when they decided to take pictures of each other rounding a bend where we had stopped for our lunch. All of them messed up the corner, turning too soon and one (of the experienced ones) actually ending up on the other side of the road. Each to their own and they’re grown-ups, my concern is they end up hitting someone coming the other way.

Now there really isn’t anything we could do about this stupidity except hope that none of them did end up being scraped off the road or hit anyone however, if there’s a new learner out there contemplating a long road trip, please don’t. Please take time to build up your skills and fitness before attempting to do something like this and please stay safe. Baby steps, take your time, you’ll get there.

Retracing our steps, and another stop at the lookout to get an afternoon shot… 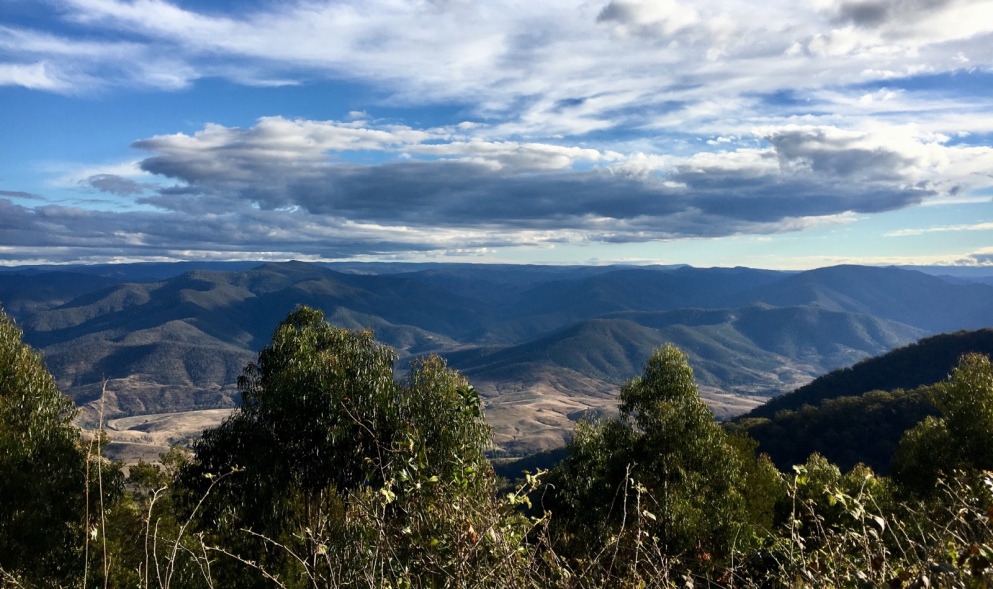 We returned to Gloucester, 502km round trip and 8 hours since we left. Big sleep tonight.

Our return pretty much retraced our first days ride through the Hunter Valley and then we deviated to head back to Sydney via Wollombi.

Over 1,200 kms covered in three days, a very viable long weekend trip from Sydney. But maybe not if you’re still a Learner.